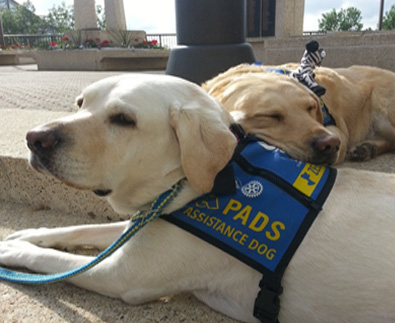 This centre is one of the first CAC’s founded in Canada and has been in operation for over 12 years. Two years ago they took on two new employees, Wren and Fossey who are yellow Labrador Retrievers, and also happen to be a mother-daughter duo. Throughout the past two years the duo have provided comfort, cuddles and confidence to over 500 individual families who have experienced trauma of some form. The Zebra Centre has been very fortunate to watch these two highly trained intervention dogs in action; breaking down barriers, building lasting relationships, and helping to provide courage and strength to children in need. The daily job of these dogs is to provide comfort during intake meetings, forensic interviews, court preparation programming, classroom presentations, and while accompanying children to court during testimonies. 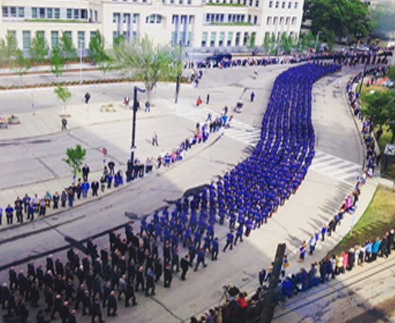 On Monday June 8, 2015, the intervention dogs help their own MDT. Edmonton lost a much respected officer, Cst. Daniel Woodall, in a tragic shooting on the west end of our city. Cst. Woodall left behind two amazing children and an army of friends and family. When members of Edmonton Police Services heard the news, they were all deeply and equally impacted, and the reality of the work they do each and every day set in as they remembered the life of their fallen member. Wren and Fossey arrived at the centre first thing Tuesday morning and instantly got to work supporting our colleagues and members of the police service, instead of their normal daily routine. They spent time in many of the detective’s offices that day, and in the days following. They were there to pet, to hug, or to cry on.

On June 17 Wren and Fossey proudly stood on all fours beside the members of the Edmonton Police Service and Cst. Daniel Woodall’s family as the streets flooded with members of various police departments from across the country. As Cst. Woodall’s two young boys stepped out of the car, they froze as they were overwhelmed by the sight of thousands of officers around them, but soon noticed Wren and Fossey standing there waiting to greet them. Immediately they both smiled and ran over to say hi. The children were relieved and thousands of other people standing around were no longer overwhelming.

Wren and Fossey spent that entire day offering their support and affection to all the family, friends, and members of EPS. It was an incredible day. It was sad and difficult, but also incredibly powerful. We watched a community band together to support the amazing work that our police force does. We witnessed people from across the world march the streets with our members to show their support. We saw two young boys break through an incredibly overwhelming moment and find comfort in the warmth of the dogs. We watched men and women quietly reach down for a simple pet or a full embrace from the two furry pups. It was clear that Wren and Fossey had made a tremendous impact that day for everyone affected by the loss of Cst. Daniel Woodall. But it was even clearer that the work these two do every single day decreases the impact felt by people who are facing overwhelming periods in their lives, whatever that may be.

Posted in In The Loop