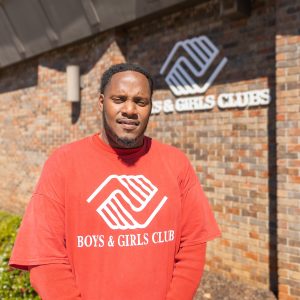 Nick Jones personifies the term “servant leader”. While his official title is Athletic Director for the Boys and Girls Club in Huntsville, Nick, or “Coach” as he’s known, provides support for area children on and off the field.

Nick was raised by his mother and grew up in Butler Terrace in Downtown Huntsville, a neighborhood with high crime rates, poverty, and limited opportunities. Nick had a tight-knit group of about 10 friends as a child and teenager, six of whom were murdered and two more dying of natural causes. He says without the Boys and Girls Club, he doesn’t know where he would be today.

Instead of working hard to leave the neighborhood, Nick worked hard to make a difference. He now serves as a mentor at the Boys and Girls Club, the same club he says likely saved his life. Nick works to make sure children in every neighborhood have everything they need to thrive – this includes meals, clothes, rides, access to sports, you name it!

Nick takes his advocacy work extremely seriously. He stepped up in a significant way in 2014 when the Huntsville City School district went through a complicated rezoning. This rezoning aimed to desegregate the district and provide more opportunities for underserved students. These opportunities came at a cost, taking some children out of their neighborhood schools and placing them in unfamiliar surroundings. Nick took it upon himself to mentor these students, helping them feel more comfortable in their new space. He also served as a liaison between parents and teachers during this transition.

Nick’s dedication to these students, parents, and teachers has paid off in more diplomas and more at-risk children heading off to college. 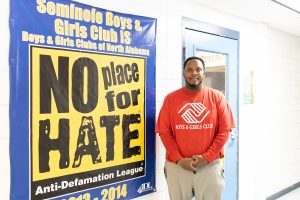 As humble as he is impactful, Nick wanted to thank the following people for helping him get where he is today: Antonio McGinnis, Dick Fountain, Sue Wardynski, Gary Saliba, Pat Wynn, Mike Samples, and everyone at Huntsville City Schools. Most importantly, he credits his mom for teaching him the word respect: how to show it and how to earn it.

Countless children in our community will one day have a similar list, and there is no doubt Nick Jones will be at the top. And that is why Nick “Coach” Jones is our March Community Superhero.

Our February Superhero is presented by Morris King & Hodge.

Do you know a hero in our community? Nominate them today!