“It’s my passion,” Marilyn Grundy said one September morning in front of a crowd of friends and former coworkers at the National Children’s Advocacy Center (NCAC). A petite woman with a quick wit and warm smile, Marilyn naturally puts you at ease. But don’t let her small stature fool you. Marilyn Grundy is a giant in the child abuse response field.

The cornerstone of the NCAC, Marilyn has been there since the beginning. Before the campus on Pratt Avenue, before the Little House on Lincoln Street, before the first Symposium in Huntsville. Marilyn has raised money, educated the public, and worked to build the internationally renowned training center.

Before the NCAC was even an idea, Marilyn worked as a SCAN (Stop Child Abuse and Neglect) volunteer through the Junior League of Huntsville. The program used puppets to teach children about appropriate and inappropriate touches. When NCAC founder Bud Cramer approached the Junior League about a representative to serve on his child abuse panel, Marilyn was tapped for the job.

Marilyn says one of the group’s first activities left a lasting impression and cemented her commitment to this mission. The group reenacted the process a child went through after a report of sexual abuse. She watched as the “child” had to go from adult to adult, service provider to service provider and share the often humiliating and traumatic ordeal. As a mother, she could not fathom putting her child through that experience.

From that reenactment, the Multidisciplinary Team was born. Allowing children to tell their story to a specially trained interviewer – and bringing all the necessary components of an investigation to one place. But Marilyn and her fellow volunteers knew that was only one piece of the puzzle. They needed a child-friendly place for the process to play out, and they needed to learn from the experts in the child abuse field. 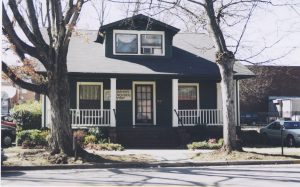 While working to secure the Little House on Lincoln Street, Marilyn also went to work finding those experts and bringing them to Huntsville. The first Symposium was held in 1985 and included a few dozen people. Marilyn, the consummate hostess, soon became the face of the conference and the celebrated woman behind the scenes. Over thirty-plus years, under Marilyn’s guidance, this conference has grown from a roomful of people from the Southeast to nearly 3000 attendees from all over the world.

Because of Marilyn’s gentile charm and commitment to taking care of her guests, the Symposium became known as the “Southern Hospitality” conference. Child abuse response professionals knew they could count on Marilyn to line up the best and brightest to teach during the day – and provide activities to network and unwind in the evening. 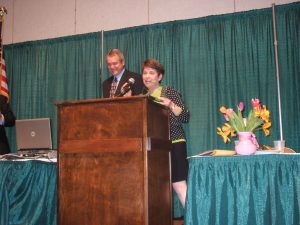 Marilyn’s reach and impact through Symposium and the NCAC’s training programs are boundless. Child abuse response professionals from all 50 states and more than 179 countries have learned how to protect children in their communities. Not to mention the children she served here at home in Madison County.

When Marilyn talks about the NCAC with friends around town, she often remarks, “Aren’t we fortunate that we live in a community that we can send men to the moon, and we can care for children. And we developed the model to care for children that is used all around the world.”

Aren’t we lucky we live in a community where Marilyn Grundy put down roots and found her passion.

On behalf of children all over the world, and right here at home, thank you, Marilyn, for your commitment and service.

Our September Superhero is presented by Morris King & Hodge.

Do you know a hero in our community? Nominate them today!