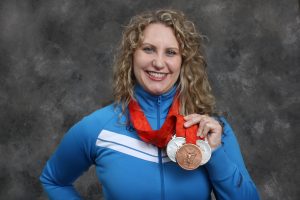 Margaret Hoelzer is a two-time Olympic swimmer, winning two silver medals and a bronze medal during the 2008 Games in Beijing, China. Margaret has worked hard throughout her life to achieve greatness as a swimmer. However Margaret has also worked hard to overcome the experience of being sexually abused for two years, between the ages of five and seven, by a friend's father. As a child, Margaret received services at the National Children's Advocacy Center. As a result of those services, Margaret was able to overcome this traumatic experience and is now helping to raise awareness of child sexual abuse and telling people about the resources available to help these child victims and their families.

Margaret is a National Spokesperson for the National Children's Advocacy Center. She is available for speaking engagements on child abuse issues, where she shares her own experiences, as well as general discussion on the topic.